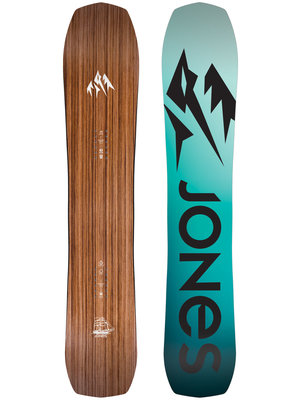 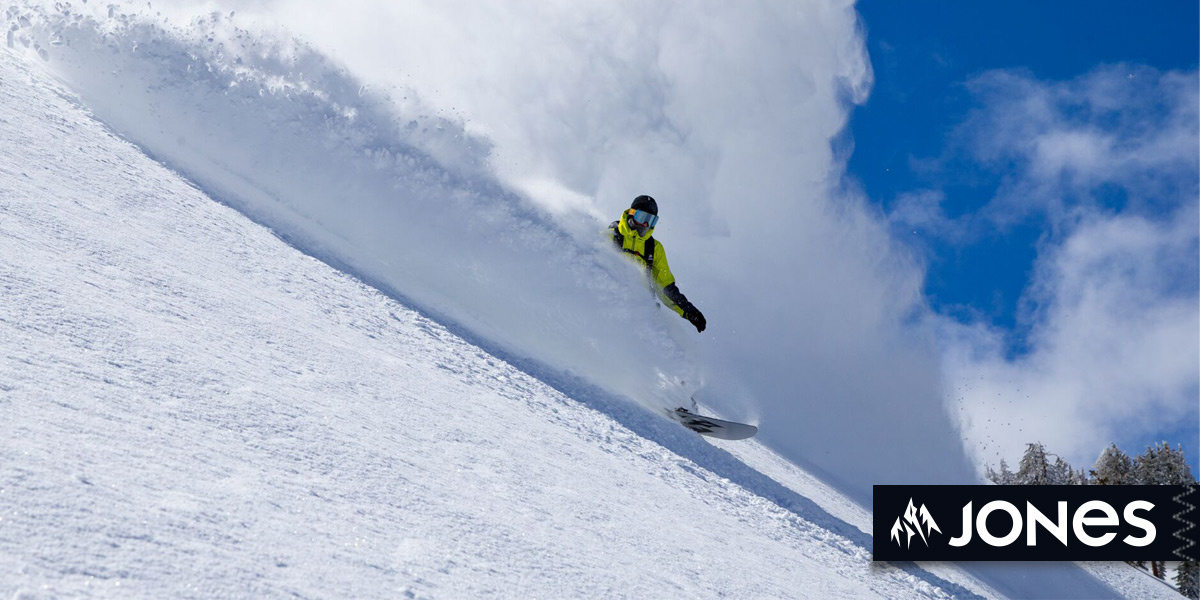 If there is one brand that has made an advance in the snowboard scene since 2009, it is Jones Snowboards. This is mainly due to the philosophy behind the brand. Jeremy Jones is a mountaineer and is one of the best freeriders at the moment. In the forest of snowboards, Jeremy wanted to bring the sport back to the essence and that is that everyone comes down the mountain in his own way and therefore needs the material for that. Only that does not have to consist of a collection of 300 boards.

So freeriding and having it back in the snowboards of Jones Snowboards. The Mountain Twin, Aviator, Flagship and Hovercraft are all ready to hit the mountain, only they all drive differently. Jeremy only adds new snowboards to the program if it actually adds to the whole. This keeps it small and well-organized for the snowboarder.

Perhaps the least understood snowboard from Jones Snowboards and because Jones Snowboards is known as a Freeride company it is an odd one out in the collection. The Jones Aviator is a full bread freestyle board for men with large cojones. Also called Custom X killer. This snowboard does not have an upper limit, this is mainly due to the 3D camber profile. It just keeps on going. This makes it an ideal snowboard for carving on the slopes. It goes without saying that you can jump with it. You are the limit of this snowboard. The snowboard comes in 7 lengths from 158 to 164. So for every snowboarder there is a Jones Aviator, but is clearly not a beginners snowboard.

The all-rounder in the family. The Jones Mountain Twin is the snowboard that suits you if you want to spend a day in the park, but want to laugh at everyone on a powder day. The snowboard has a camrock profile. This means that there is camber under your feet for stability at high speeds and unparalleled grip. Just before the nose and tail there is a rocker profile, which makes the board more forgiving. Although it is a twin, the snowboard has a progressive flex pattern, keeping the snowboard under control at higher speeds. The Jones Mountain Twin comes in seven lengths. This snowboard is suitable for medium to advanced snowboarders. For the ladies there is the Jones Twin Sister . Board has the same characteristics, but has ladies specific sizes.

In terms of shape and design the same as the normal Jones mountain twin. The difference is in a wooden topsheet and carbon stringers, which gives him more pop. The Jones Ultra Mountain Twin is lighter, stiffer and more responsive than the normal Jones Mountain Twin. A slightly more aggressive board than the nominal variant, so more for the advanced snowboarder.

The ultimate "extra" board for the deeper powder days. You simply have to have this with you. The sensation of a short tail and the deep turns that you can turn with it are unparalleled. Whether you want to turn long sprays or short turns through the forest, it's all possible with the Jones Hovercraft .

If you want high, deep and hard ... Then the Jones Flagship is your choice. The Jones Flagship is the basis around which everything is built at Jones. The shape of the board is a directional rocker. this means a camber profile under the feet and a flatbase in the front and rear. The wooden top layer, making it almost a shame to go into the snow with it, creates a board with more pop and is responsive to its rider. Available in 8 lengths with the length 172 cm. Do you really want to read everything about the Jones Flagship? Then download this product story - Jones Flagship from Jones about the Flagship.

New in the collection. the board to completely snowboard the entire mountain. This new snowboard that comes in multiple sizes is for that snowboarder who is not afraid to completely carve down the mountain, but also does not shy away from a big pow session. The Mind Expander has a longer nose and short tail, but still has good all-round features.

The Frontier, formerly called the Explorer, is a directional freeride board designed to be the perfect daily all-rounder for the playful all-mountain shredder. With a freeride nose and a freestyle tail, the Frontier is ideal for powder days, park days and every day in between. Want to know everything about the Jones Frontier? Then download the product story about this board!

The most important Jones Snowboard features

Directional Rocker Profile
A flex pattern characterized by a nose that has more rocker, making it float better in the powder. This results in a more relaxed driving behavior and forgivable when hitting hard objects on the road. Applied in the Jones Flagship.

3D Power Camber
A camber profile where the sides on the front and back can be slightly rounded. So the responsive of a camber board, but more forgiving because of the curves.

Camrock
a unique flex pattern devised by the engineers at Nidecker Snowboards and applied in Jones snowboards. Cam rock gives the board more freestyle properties due to the loose feeling in the nose and in the tail, while you can still charge because the camber between the bindings allows it.

Blunt Nose
How a snowboard rides in the deeper snow is largely determined by the shape of the nose. After all, it makes the first contact with the white gold. Just look at your point on your snowboard and see how much snow comes from the first point of contact. Which means that you are plowing through the snow. By blunting the nose you get better float properties because the snowboard gets longer and therefore less "plows".

Progressive Sidecut
At the end of the side of your snowboard, the radius increases to the point of contact of your board (just before the tail of your board). This ensures better turns and the ability to use and come out better.

Mellow Magne Traction
What does cut better through bread. A knife with a straight blade or a knife with cartels. Right, the last one. This also applies to snowboards. By adding multiple contact points, the board has more grip. A rocker board does better in the all-round area, but the lack of contact points with the steel edges makes snowboarding sometimes more difficult. With the Mellow Traction, the board has grip under all circumstances.

Jones Snowboards uses only the best of the best. Below is a small summary of what is put in to make you feel at home.

Ultra Construction
Super-light wooden core using the lightest types of carbon ensures an ultra-light construction. Do you want to know everything about the Jones wood cores and then download the product story.

Carbon Quadrax
The Carbon Triax is a glass laminate with carbon stringers. This design gives the board more pop.

Carbon Triax
Carbon Triax is a glass laminate with carbon woven into it. This creates a snowboard that dampens vibrations and remains stable at high speed.

Biax Fiber glass
This type of laminate gives a board that is forgiving and still has pop.

Topsheets
The boards from Jones Snowboards that are provided with a topsheet made of wood give a little more cushioning, on the other hand a film topsheet gives more stiffness and is more resistant to external impact.